“Earlier this year, McDonald’s Sweden received global attention for a fun little (literally) publicity stunt that also raised awareness of the ongoing issue of dwindling bee populations. Billed as ‘the world’s smallest McDonald’s,’ this ‘McHive’ didn’t serve any food. Instead, it was a fully-functioning beehive designed to mimic a MickeyD’s outpost with features like small Golden Arches and a not-particularly-functional drive-thru.

Yet, as intentionally silly as the concept was, McHives caught on, with other Swedish locations adding one of the beehives to their roof. And now, after seeing the success of that campaign, the creative agency behind it, Nord DDB, are back again with another bee-benefiting concept for McDonald’s Sweden: building habitats for wild bees into and behind billboards.

‘It is estimated that 30 percent of Sweden’s wild bees are threatened,’ the announcement explains. ‘A big problem is that they lack places to rest.’ The solution is twofold: Some McDonald’s locations have replaced their usual billboards with wood installations that wild bees and other insects can use as a kind of ‘bee hotel.’ These signs are available to be ordered by any of McDonald’s’ Swedish franchises and can be customized to include whatever messaging the location wants. 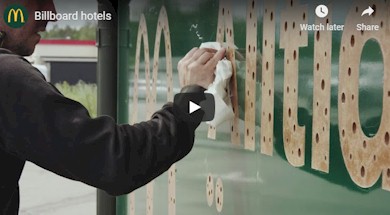 But even simpler still, the fast food chain has also teamed up with the massive billboard brand JC Decaux to place habitats for wild bees behind existing billboards in spaces that aren’t otherwise used. ‘Bees are most comfortable if their nests are in a south facing position,’ the campaign states. ‘The first test is now live in Jarfalla outside Stockholm, where six large bee hotels have been mounted on the backside of a north facing billboard with hopes of scaling up the initiative in spring 2020.’

You can see both styles of ‘bee hotels’ in action in this video: 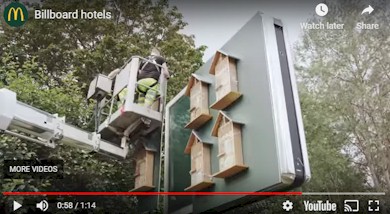 ‘The survival of bees is an important issue for society as a whole,’ Henrik Nerell, environmental manager at McDonald’s in Sweden, said. ‘That we can use our signs for a good cause feels great. The initiative, which has sprung from our franchisees’ personal commitment to the issue, has been made possible in collaboration with JCDecaux and we are proud and excited to welcome our flying guests soon as they move into our bee hotels.'”