“Maryland’s highest court has upheld a tax imposed by the city of Baltimore on selling billboard advertising.

The Court of Appeals last week rejected arguments by Clear Channel that the tax violates constitutional provisions that protect freedom of speech.

The appeals court ruled 6-1 that the tax ordinance was not subject to heightened scrutiny under the First Amendment because it did not single out the press, target a small group of speakers or discriminate on the basis of the content of speech.

Clear Channel’s challenge to the ordinance had previously been rejected in federal court, the Maryland Tax Court, the Baltimore City Circuit Court and the Court of Special Appeals.”

“Soon when you walk down the street, 3-D creatures could try to sell you something”

“A new form of outdoor advertising is slowly taking hold. But experts warn of overload…Anamorphic advertising is coming — usually right out of a building. (

It all began with a floating cat. 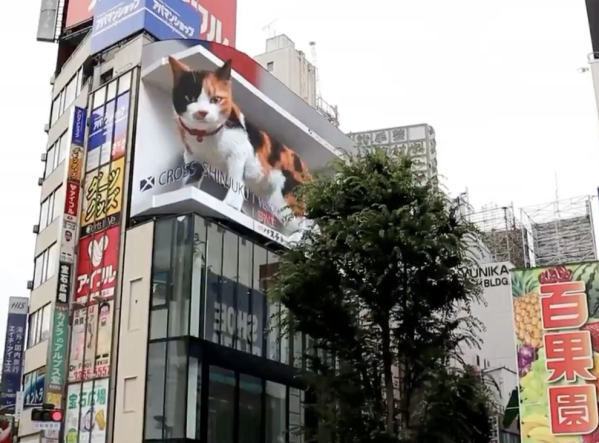 The giant feline suddenly appeared suspended over Tokyo’s Shinjuku train station. Throughout the summer, it stretched awake in the morning, meowed at passersby during rush hour and curled into a sleepy ball after midnight.

The cat, along with a cresting ocean wave above the streets of Seoul, wasn’t a biology experiment gone awry. It was a 3-D anamorphic outdoor ad, a proof-of-concept from several Asian design firms. The pieces would inspire principals at British ad company Ocean Outdoor, owner of many public screens across Europe, to create tools for a 3-D ad platform called DeepScreen. Part art installation, part ‘1984’-esque vision, the results hint at what our commercialized outdoor spaces might soon look like…

In just a few months, Ocean Outdoor’s Piccadilly Circus location and others across Europe have attracted advertisers including Fortnite, Netflix, Vodafone (the ad has 25-foot rugby stars and their ball bursting through a building), Sony, Amazon’s Prime Video (for its new ‘Wheel of Time’ fantasy series) and food-service company Deliveroo. Two weeks ago, the British agency that worked on the ‘Wheel of Time’ spot, Amplify, brought it to Times Square…

‘This is exciting and it’s attention-getting,’ said Arun Lakshmanan, an associate professor of marketing at the University at Buffalo School of Management and an expert in immersive advertising. ‘It also could really start getting intrusive…’

Production is expensive — it can cost upward of $500,000, several times a 30-second TV spot — and labor intensive…

Nir Eyal, an author and expert on the attention economy, called this in an email the ‘shiny pony’ problem. New forms of advertising lose their luster. Customers could lose interest.

But these ads may not be aimed only at them. Teixeira notes that the appearance of innovation could be equally important for what it telegraphs to investors, retailers and competitors.

Even the skeptical would admit there’s something cool about dynamic images occupying the space around us. But is it scary in the hands of corporations? Could advertising get ‘Minority Reported,’ where we are all Tom Cruise, assaulted by airborne ads tailored to us every time we leave our homes?

Could a political demagogue even use the tech to loom large in public?

‘How we want to regulate this is a very good question,’ said Buffalo’s Lakshmanan. ‘Unfortunately, in the history of advertising, it tends to be answered only after something has gotten popular.'”

Year ahead: “Will space advertising take off in 2022?” Current dark skies issues even without advertising

“Plans to advertise from space have been around for decades, but the latest proposals have met fierce criticism.

In August, the Canadian company Geometric Energy Corporation (GEC) announced that it wanted to launch a small satellite with a billboard on it on a SpaceX rocket. The story immediately went viral, and SpaceX and GEC received a barrage of criticism.

In 2019, Russian entrepreneur Vlad Sitnikov got caught up in a similar controversy. ‘I’m an ad guy’, Sitnikov told Al Jazeera. ‘So I thought it would be cool to see a new type of media in the sky…’
‘A big wave of hate crushed me. I decided to halt the project, because people around the world started hating me.’ His start-up, StartRocket, has been in limbo ever since.

A key objection to space advertising proposals is that they will contribute to light pollution from space, a problem that is growing even without ads in orbit.

Advertising in outer space might seem like a vulgar idea, but it’s one with a long history. It’s also getting more popular because the cost of going to space is falling. But the side effects, such as light pollution and space debris, might not be worth it…

Not in my low earth orbit

With space becoming more accessible, and less costly to access, proposals for using space for advertising or entertainment purposes have been increasing. Besides the GEC and StartRocket projects, Japanese start-up ALE wants to use satellites that drop small balls to create artificial shooting stars on demand – a proposition that raised close to $50m in venture funding.

One key objection to these proposals [space advertising schemes] is that they will contribute to light pollution from space, a problem that is growing even without ads in orbit.

‘Until recently most of our work had been on ground-based light pollution’, said Jeffrey Hall, director of the Lowell Observatory, and chair of the American Astronomical Society’s Committee on Light Pollution, Radio Interference, and Space Debris. ‘The issue of light pollution from space is new territory for us, and it only started in 2019 with the launch of the SpaceX Starlink satellites,’ he told Al Jazeera.

Large, so-called ‘constellations’ of small, low-flying satellites have boomed in recent years. For example, SpaceX Starlink wants to launch tens of thousands of satellites to offer internet connections all over the world.

For astronomers, however, to observe space they need relatively dark skies. Yet bright outdoor lights on land, or satellites that emit or reflect light, like the Starlink constellation, can ruin what they do. And Hall fears space billboards might make the problem worse.

‘Satellites leave very bright streaks in images’, he said. ‘The streaks can saturate pixels in the image, and completely ruin it…’

‘Things are moving so fast it makes sense to slow down until we understand the impacts of what we’re doing’, said Hall. Space law

It is possible that space law will prevent satellite billboards. Space is subject to the 1966 Outer Space Treaty, which sees space as a global commons.

‘There is nothing specific in the treaty about space advertising’, said professor emerita Joanne Gabrynowicz, director of the International Institute of Space Law. ‘But article 9 does require signatories to exercise ‘due regard’ of other signatories’ interests and to avoid ‘harmful interference’ to other nations’ space activities,’ she told Al Jazeera.

Satellite billboards that impede astronomers from observing space could be subject to this. On top of that, the US passed a national law during the 1990s that prohibits space advertising that might be deemed ‘obtrusive…’

Of course, SpaceX’s Starlink satellite constellation was reviewed and approved by US authorities, even though it impacts astronomy. International law also depends on how treaties are applied at the national level. The Russian state would, for example, need to decide whether it sees a Russian space advertising startup as being in line with the Outer Space Treaty. Yet there is a legal argument for blocking space advertising if it would cause too much light pollution…”

“A tax levied by the city of Cincinnati on billboard companies in an effort to close a budget shortfall is an unconstitutional of First Amendment rights to free speech, the Ohio Supreme Court ruled Thursday.

Justice Sharon Kennedy, writing the court’s unanimous opinion, said the companies, as publishers of speech, can’t be singled out for engaging in protected expression. She also noted that because of various exceptions, the tax applied mainly to two companies.

Those businesses, Lamar Advertising and Norton Outdoor Advertising, indicated the tax would require them to remove less profitable billboards, which has the effect of limiting protected speech, Kennedy said.

“That the tax involves billboards rather than the institutional press is of no consequence, and strict scrutiny applies,” Kennedy said.

Cincinnati imposed the tax three years ago to raise $709,000 to help cover a $2.5 million budget shortfall. The city argued unsuccessfully that the tax was only a commercial transaction and didn’t target billboard messages.”

SCOTUSblog has been maintaining an ongoing list of various proceedings and orders on their site leading up to November 10 argument:

To track proceedings and orders via SCOTUSblog

“…In November, the court will hear argument in City of Austin v. Reagan National Advertising of Texas, a First Amendment challenge to an Austin regulation that bars some digitized billboards but allows others depending on the billboard’s location. A new petition asks the court to take up another challenge to a city policy that involves differential treatment of signs.

The city of Baltimore taxes the owners of displays that advertise services that occur in a different location, meaning many billboards but not other types of signs. One of the country’s largest billboard-advertising companies challenged the tax under the First Amendment. Applying a relaxed standard, Maryland’s highest court upheld the tax as rationally related to the city’s legitimate interest in raising public revenue. In its petition, the billboard owner, one of four such companies in Baltimore, argues that a heightened standard should apply. The company also argues that Baltimore’s distinction between on-premises signs and off-premises signs is ‘even more problematic’ than the one presented in Austin. The case is Clear Channel Outdoor, LLC v. Raymond.”