Tampa Yard Greetings makes and installs beautiful, colorful, delightful yard transformations to celebrate any special occasion, from birthdays and graduations to graduations and new babies. They also have blank signs you can customize yourself.

The folks from Tampa Yard Greetings swoop in when no one is looking and turns customers’ yards into a wonderland of well-wishes or, if you prefer, pink flamingoes. They leave the signs in place for 24 hours, up to one week.

There are fold-out signs propped up along sidewalks in Tequesta, banners along U.S. 1 in Jupiter and a hodgepodge of flags, banners and yard signs on Military Trail near the West Palm Beach city line.

Businesses, particularly restaurants, are doing what they can to promote their services during the coronavirus pandemic, luring motorists off the street and into their establishments to grab carryout food now that they are barred from serving meals on-site.

On the flip side, some Palm Beach County municipalities — among them Palm Beach Gardens, Jupiter and Tequesta — say they are relaxing enforcement of ordinances that regulate where businesses can prop up signs and how those advertisements look.

‘We knew that the whole COVID thing was going to impact their business and we felt like that if we gave them the option to use kind of inexpensive means to notify the public that they’re open for takeout and delivery, it might tide them over through this,’ said Dean Fowler, Jupiter’s code compliance supervisor…”

Photo: Melton
“Want to be reminded how the rich and powerful among us act as if they are above the law? Then tune in to the Super Bowl on Sunday.

Even before kickoff, you’ll likely see an aerial shot of two giant commercial advertisements on the roof of Hard Rock Stadium. And you’ll see them again and again and again before the game clock expires.

The ads are illegal — and those who should know that already do.

The signs violate Miami-Dade County’s Sign Code, adopted in July 1985. Since then, it has become the law in every municipality in the county. That includes the city of Miami Gardens, host to the NFL championship game.

Within each municipality, that city is responsible for the primary enforcement of the Sign Code. But the county never relinquished its enforcement rights and may exercise them at will, anywhere.

During the 34 years since the Sign Code’s adoption, most municipalities have honored it. But some cities, most notably the city of Miami, have “approved” many illegal signs — often in the face of expert testimony beforehand that such a municipal decision would violate specific Sign Code provisions.

The Sign Code defines “roof sign” as: “Any sign which is painted on, fastened to or supported by the roof or erected over the roof.” Those two mammoth signs atop Hard Rock Stadium meet that simple definition. And the Sign Code entirely outlaws all roof signs: “Roof signs are prohibited in all the [zoning] districts.”

This ain’t complicated — the signs violate the County Code.

Is my heartburn really important? Does it truly matter that any sign is painted on the top of any building, completely out of view except when you might be flying over it or a blimp films it for an international television audience?

I get that. I’m not going to convince anyone to be offended. But I am insulted, on a couple of levels.

First, the stadium roof signs are a brazen affront to our local rule of law; thus, they must be removed at once. Continued benefit derived from those prohibited signs by the rich and powerful who own and operate Hard Rock Stadium insults to all law-abiding county residents.

I’m indignant, too, because county officials know that those signs are illegal. Yet none of them can be bothered — by the outlaw signs themselves or to enforce their own County Code.

Do they not care at all? Or could it be that the county is an investor in Hard Rock Stadium, paying its owner multimillion-dollar bonuses for attracting big-time events, such as the Super Bowl? Anyone can figure that one out.

It would be easy to keep images of Hard Rock Stadium’s two illegal roof signs off the airwaves during the Super Bowl telecast. It might cost billionaire owner Stephen Ross a few bucks, but will he do it?

I’m not holding my breath.

Eston “Dusty” Melton, a former political reporter for the Miami Herald, is chairman of Gryphon Partners, a Miami-based governmental consulting and lobbying firm. Melton, who represented the outdoor advertising industry in 1980s, helped author the Miami-Dade County Sign Code. He wrote this op-ed as a private citizen and with no client interest.”

Photo: Villages-News.com
“Two elected officials in The Villages have raised objections to residents one day soon purchasing the golf cart bridges that will act as billboards advertising Florida’s Friendliest Hometown.

The golf cart bridges being erected across State Road 44 and the Florida Turnpike will provided a crucial artery for golf cart transportation to and from the Village of Fenney, the massive yet-to-be-constructed Villages of Southern Oaks and other areas in the southern end of The Villages…

He said it’s not too soon to begin forecasting what the cost of maintenance of the bridges will be, if for nothing more than ‘transparency’ for the residents who will soon be footing the bill…

CDD 8 Supervisor Sal Torname had a slightly different take on the golf cart bridges that remain under construction in the southern end of The Villages. He said the bridges are giant advertising billboards for The Villages.

‘Why doesn’t the Developer offset the cost for us with advertising expense? We are promoting The Villages,’ Torname said. ‘We are providing the structure that supports the advertisement for The Villages, and they are selling housing.’

A district official said PWAC will take over maintenance of the bridges ‘six months after they are operational.'”

“The city of Clearwater welcomes its residents to apply to paint their own storm drain mural. In addition to their artistic value, painted storm drains serve a very important educational purpose by addressing the misconception that it’s acceptable to dispose of trash, grass clippings, and chemicals down storm drains. The water that flows through Clearwater’s storm drains goes directly into the Gulf of Mexico or Tampa Bay without treatment. Therefore, messaging to prevent the disposal of waste in storm drains is pivotal to maintaining safe, clean oceans and beaches.

To encourage residents, volunteers, and students to get involved, the city of Clearwater will provide all supplies free to participating groups. 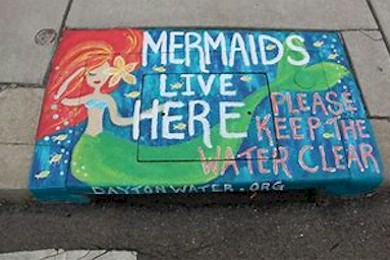 “Recognizing the need for information, cities across the region are creating murals and posting signs that inform people that only water belongs in stormwater drains. Last year, in partnership with the city of Tampa, Keep Tampa Bay Beautiful volunteers painted stormwater drain murals in Tampa.

This past summer, Pinellas Park worked with artists to paint five stormwater drains near a middle school and a senior center — both areas with higher-than-average foot traffic — to increase visibility and educational opportunities.”

Legal: Potential impact on FL’s city sign codes; Restrictions on the number of signs per yard at risk

“The small city of Bel-Nor, Missouri is at least temporarily blocked from enforcing a local law that restricts homeowners from displaying more than one sign at a time on their property, under a federal appeals court ruling issued on Monday.

Lawrence Willson, who owns and lives in a single-family home in Bel-Nor, sued the city in January 2018, alleging the ordinance trammeled his free speech rights and other constitutional protections. The city cited him because he had three signs in his yard.

One said ‘Black Lives Matter,’ another ‘Clinton Kaine’ and the third ‘Jason Kander U.S. Senate.’ Each of the signs is about 18 by 24 inches, according to Tony Rothert, legal director for the American Civil Liberties Union of Missouri, who is representing Willson.

“In our view, a one-sign restriction is too restrictive of speech,’ Rothert said by phone on Monday.

He went on to describe yard signs as an important form of speech with a ‘communicative value that is unmatched’ in other mediums.

‘It’s different than buying a billboard, or taking out an ad in the paper, or even writing a letter to the editor, to put what you believe in front of your home,’ Rothert said.

The city has argued that its ordinance is ‘content-neutral’ and regulates all sorts of signs in the same way, and is therefore not subject to heightened legal scrutiny. It has cited traffic safety, especially preventing distractions for drivers, as a main consideration with the sign restrictions…

A federal district court last March denied Willson’s motion for a preliminary injunction, which would have prevented Bel-Nor from enforcing the law, at least while the court case played out.

But a three-judge panel for the 8th U.S. Circuit Court of Appeals has now reversed that decision.

In an 11-page ruling, the court said Willson is likely to succeed on the merits of his free speech challenge under the First Amendment against the local government ordinance and sent the case back to the lower court for further proceedings.

A Bel-Nor police officer in June 2017 left Willson a written warning that by displaying his three signs he was violating part of the city code, according to the complaint Willson filed in federal district court.

The code, at that time, limited residential property to one ‘political advertising’ sign and said ‘political signs’ had to be removed within 15 days after an election.”

Read entire article in Route Fifty. NOTE: Due to an unusual ad strategy this article’s complete and detailed content can be easy to miss. There is a small link to go past the full width ad and continue reading.

Read article in New Yorker about art installation in photo above.

« Older Entries
Next Entries »
Citizens for a Scenic Florida