“An average of 250,000 people bike, walk or jog the Pinellas Trail every month. However, those in charge of the 70-mile-path say they want it to be more than just a place of exercise but an overall cultural experience.

So they are giving cyclists a reason to pump the brakes and take a picture along the Pinellas Trail this week.

‘Its like a stamp of approval from the community saying that my work is valuable and that I’m an asset and that’s nice, I love it,’ said artist Yhali Ilan.

Ilan said it was an honor to be one of four local artists chosen to paint two overpasses along the trail, one in Palm Harbor and the other in Tarpon Springs. Each one has a different Florida theme…

‘Our parks department will go and paint over in plain gray paint and the next day they’ll come back and they’ll be graffiti on the tunnels,’ said Alexis Ferguson with Pinellas County Public Works.

Ferguson is not only a public works employee but she rides the trail all the time. She said it’s been proven these murals detract from crime.

‘There is a respect among graffiti artists and our local artists here painting murals that they don’t tag the art murals and that’s been seen throughout the county,’said Ferguson…

The plan is to continue to add more art to the trail every year.”

Photo: Christina Donahon
“In Crestview’s historic downtown distract, native Floridian wildflowers are sprouting on the side of a popular bakery café.

‘It started with graffiti we had to cover up,’ Dorene Howard said. ‘Tiffany came to us awhile back and asked if she could help.’

‘I felt we should do a downtown beautification project of some sort,’ Woodham said. ‘I want to help make downtown pretty. Kimberley and I met and we discussed what the design should be and Florida wildflowers came up. We wanted to do something that people would like and would want to take their pictures in front of…’

While the Howards painted out the graffiti, Woodham, who funded the project, engaged Donahon’s talents to realize their concept of a Florida wildflowers motif…

‘We wanted to do something to help beautify Crestview,’ Dorene Howard said. ‘We’re doing our part to make Crestview look good.'”

Photo: Wynwood BID
“Go for a walk in Wynwood and you’ll see the colorful, detailed work of street artists and graffitists whose creations have made the neighborhood a world-renowned destination. Along some storefronts, masquerading as art, you’ll also see advertisements for liquor companies, beers, designer clothing, Netflix specials and television shows, and chocolate milk.

Now, the Wynwood Business Improvement District (BID) is fighting what its board characterizes as the commercialization of Miami’s famed arts district.

The Miami 21 zoning code for Wynwood prohibits signs or ‘advertising devices of any kind’ that are visible from a public right-of-way. The city’s planning and zoning code on murals regulates where such pieces of art can be displayed. Artists are required to apply for mural permits, which are issued by the city manager once the artist meets certain criteria, including payment of fees.

Once an artist has acquired a mural permit, they can obtain all the building permits the city requires for a mural to be put up. Applicants are required to comply with all the terms set in the zoning code or risk having their permit revoked and being disqualified from applying for future mural permits.

Although the zoning code allows for murals to have a ‘limited commercial sponsorship message,’ the Wynwood BID says most of the advertisement murals going up in Wynwood are unpermitted.

The business that allowed the Jack Daniel’s mural, for example, was slapped with a citation for violating the Miami 21 code by ‘illegally erecting, placing, or mounting an outdoor advertising sign.’ The proposed correction on the citation was for the business owner to take down the advertisement or acquire a permit. Each code violation carries a fine of $1,000 per day until the issue is resolved.

‘This past year and a half, there seems to be a middle person contacting major companies and telling them it’s OK to put advertisement murals in Wynwood,’ Gonzalez speculates.

Gonzalez says the BID believes this middle person is being paid tens of thousands of dollars to secure advertising space and to hire the artists to create the murals. That complicates enforcement, according to Miami police Cmdr. Dan Kerr, because the fine is no match for the lucrative potential of bringing advertisers to the area. Kerr, a self-proclaimed fan of all things Wynwood, says his concern is that artists might not know about the zoning code or that they can be cited for painting the murals.

In March, for example, Kerr says he talked to an artist creating a commercial mural who was oblivious to the zoning regulations.

The artist was told to paint by whoever they were working for,’ Kerr says. ‘Under the guise of hooking the artist up with a gig and money, the people commissioning the artists are jeopardizing them civilly. That’s one thing that bothers me.’ Kerr and Gonzalez say local artists and taggers will sometimes spray-paint over the advertising murals to make a point about commercialism not being welcome on the neighborhood’s walls.

‘For 15 years, the neighborhood has been a haven for artists to portray art to the public,’ Gonzalez says. ‘If you are a true artist of graffiti in Miami or in South Florida, it’s basically against the moral code of the artist to do advertisements. Your reputation is everything.’

But some artists say that art isn’t free and painting advertisements is a good way to make money to pay the bills so they can have leeway to work on passion projects.

One artist, who asked New Times not to identify them by name, says advertisements in Wynwood have been a problem for a long time, but they just recently became a problem for the BID.

‘The question for me is, is it really a problem? Or is this the only way artists can get paid in Wynwood?’ the artist says. ‘I make murals in Wynwood. I always try pushing the art and keeping it relevant. I think the problem is more than with advertisements. The advertisements are needed because no one pays the artists in Wynwood. The property owners don’t really like to pay for art.’

The artist says he believes advertisements in Wynwood are a positive phenomenon because artists have bills to pay and families to support just like everyone else. But he agrees there should be some regulations and controls. A painted Jack Daniel’s bottle ‘does nothing for the culture,’ he says. But there are ways to promote products, such as by creating a piece of work with a small tag underneath or on the side that says the art is sponsored by a particular company.

Museum of Graffiti co-founders Alan Ket and Allison Freidin say they too are supportive of commercial art that allows artists to get paid.

Freidin says there aren’t a lot of opportunities for graffiti artists to make money, so any deal that allows them to showcase their talents and take home a paycheck is ideal…”

Helmed by newly named Public Arts Program Manager Michelle McKoy, this project is one of many coming to the city. Murals and public art have been popping up around North Miami for quite some time.

‘I’m looking forward to working with innovative artists and implementing public art that reflects the diversity of North Miami. Infusing energy on multiple levels is what art does, I’m fortunate for the opportunity to navigate this terrain using expressive art modalities,’ said McKoy…

In total, Koebel’s work is featured on four concrete benches, six utility boxes, one single-story concrete pavilion and two smaller single-story utility buildings… Koebel worked closely with the city in vinyl-wrapping the work at the park to ensure that the designs hold up to Miami’s weather elements…

A formal Call to Artists (released in February) for the public art in Griffing Park garnered 23 applications. The North Miami CRA Board and Art Selection Committee chose Koebel with a commission of $3,500 for his chosen design… Later down the road, they will work with private property owners along 125th Street to create sustainability murals. Another upcoming project will involve painting fire hydrants in the community and will involve the Police Athletic League of North Miami. 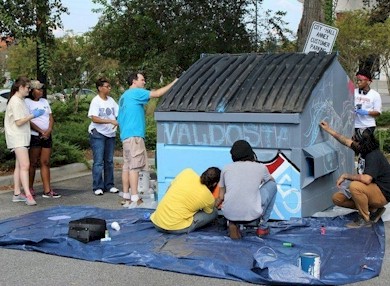 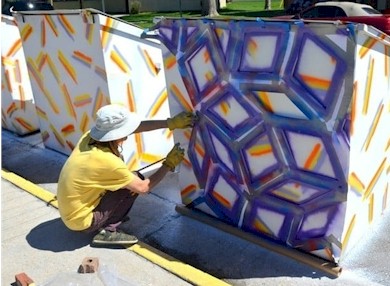 The Livery Stable Mural, painted on the Lowman’s law firm at 32 S. Main St., is one of eight murals featured on a new walking tour sponsored by the Hernando Fine Arts Council. It features the livery stable, which housed the Bell Fruit Company, one of the most important businesses in early Brooksville.

Knowles is steeped in local history, having entrenching herself in several organizations over the years. She served as chair for the annual Brooksville Raid Reenactment, was an 18-year president of the Hernando Museum and a member of the now-defunct Mural Society that worked with the city to produce and fund the eight murals featured on the tour. She also is project coordinator for the Hernando Fine Arts Council and co-chair of Brooksville’s annual Art in the Park event.

The mural tour is way to bring light to art that might have been forgotten, she said, or that people might be wondering about — especially if they are new to the area…

This tour promises to be a more low-key, casual walk through art and local history, with one modern caveat. Those who go can use their cell phones to access QR codes located on special plaques that include information about the murals and the artists.

‘The tour takes about an hour,” Knowles said, adding that the murals are all within three blocks. ‘There’s nice places to have lunch or shop so people can make a day of it.'”